O-NET, the town-owned Internet, phone and TV service company in Olds, has decided what to do with award money it received.

Chinook Arch Victim’s Services helps victims of crime and tragedy by providing support during difficult times, as well as accompaniment to police interviews and court proceedings.

O-NET won the Best story: making your community stronger award for a video about the company, called Driven By Our Community.

It was one of five awards announced May 23 by the Canadian Communications System Alliance (CCSA), which represents more than 110 independent companies providing Internet, TV and telephone services across Canada.

In addition to the prestige of winning the award, O-NET received $1,000 to be donated to a non-profit group in Olds of its choice. 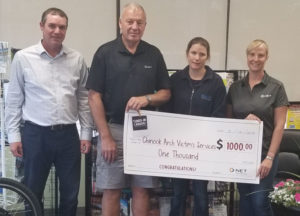